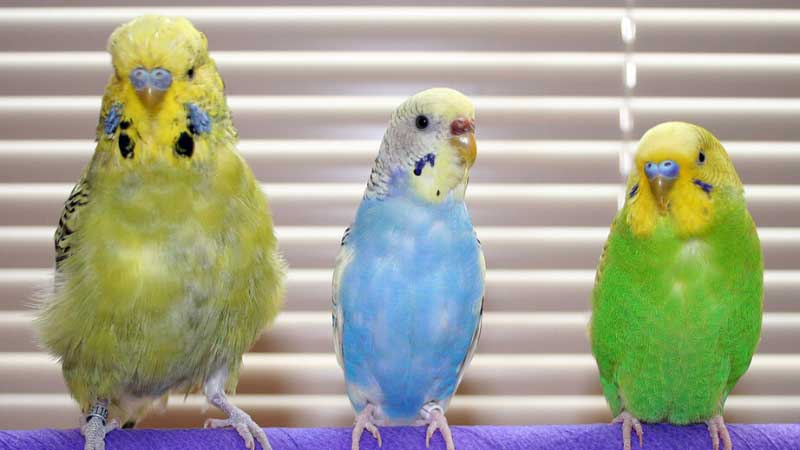 Wondering how old your little budgie/parakeet is? There are three ways to approximate the age of your budgie:

EXCEPTIONS:
Lutino/Albino, Recessive Pied – These varieties do not have normal feather markings and therefore this age test cannot be applied to them.

3) ID BAND – Some budgies have a band around one of its legs. If you look closely, you can see some numbers and letters. This is an ID band. If the band is blank with no letters or numbers, it is a “family band” and won’t tell you anything about the bird, unless you are its breeder.

Reading an ID Band: One set of letters is the company who issued the band. The next set of numbers and letters is the breeder’s number and/or initial(s). It is the next part will tell you how old your budgie is. It is the year the bird was hatched in. If the bird was bred in California, the last digit of the year will be inside a California Bear. Otherwise, usually the last two digits of the year are displayed. The next set of numbers is the serial or pedigree number of the bird. For example, if this number reads 52, then this bird is the 52nd budgie hatched that year to that breeder.

ID band color: An easier (but less reliable) way to tell what year the bird was born in is to look at what color the band is. Different colors represent different years and will tell you how many years old your bird is. However, different organizations which issue ID bands may use different colors than other organizations for the same year. The most widely recognized band issuing organization in the US is The American Budgerigar Society. If your budgie’s band was issued by this organization, you will see “ABS” on the band (see picture example below). The following is the ABS list of colors for each year. If your budgie’s band is not ABS, then the following list may not apply.